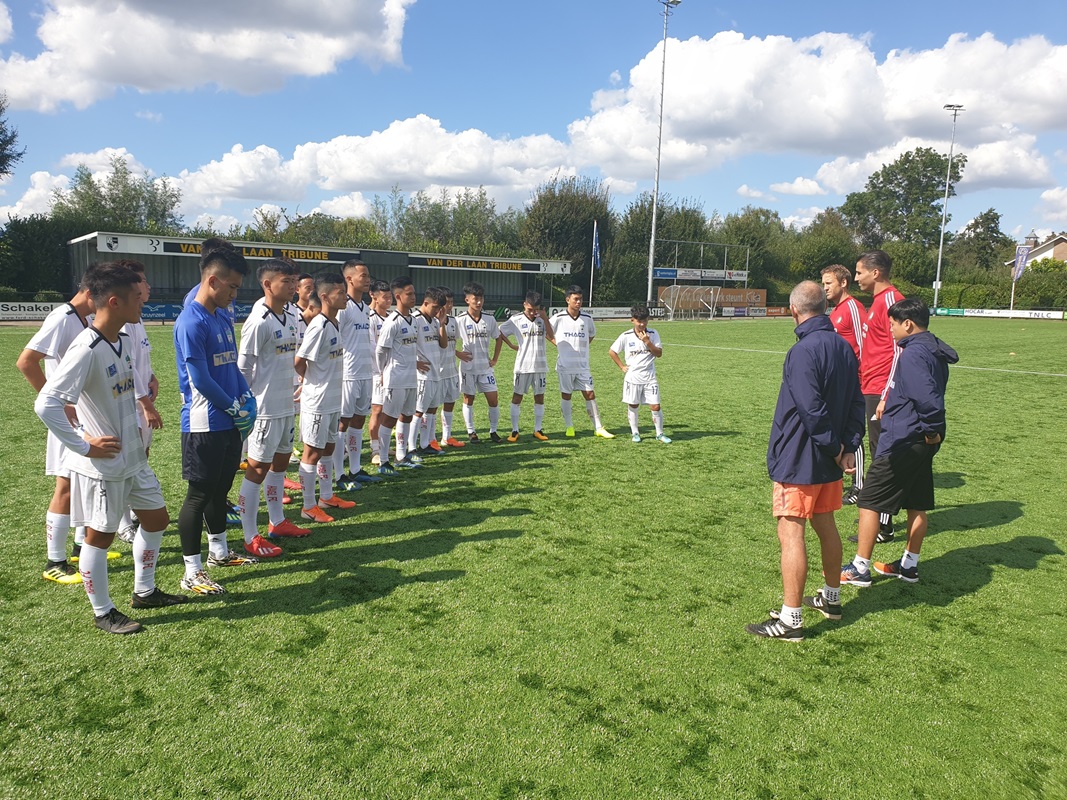 The team arrived on the first of September and had their first training session the very next day. To determine their level the Feyenoord staff immediately put them to the test as they had their first match that same week. The Vietnamese guests played against BVV Barendrecht and won resoundingly with 6-0. That week the youngsters also had the opportunity to watch a professional match between Feyenoord’s partner club FC Dordrecht and MVV in the Dutch second league. All players visited the city of Rotterdam during the first weekend for a guided city walk including a boat tour during the World Port Days.

Early in the following week the team had to prepare for the next matches against Almere City and FC Dordrecht. The Vietnamese won both their matches with 4-1 and 4-0 respectively. All the matches that were played throughout their stay were recorded and analysed by the Feyenoord staff in order to help the players in their individual development. ‘As a coach I am glad that I have technological resources to help players develop’, said David Toxopeus, International Development Coach at Feyenoord. ‘The knowledge and experience of Feyenoord really comes to fruition through the use of video analysis in which we can replay important moments in a match for each individual player and help them identify weak points that need to be ironed out.’

Besides playing themselves, the players travelled to the Belgium city of Sint Truiden where they visited Hoàng Anh Gia Lai youth product and Vietnamese international Nguyễn Công Phượng, who now plays for the Belgium first league team Sint Truiden. The U18’s enjoyed a dinner together with the football star and then attended Sint Truiden VV’s match. On the next day, they got to experience the true spirit of European football as Feyenoord beat ADO Den Haag 3-2 during a game that was dedicated to the charity of the Sophia Children’s Hospital.

The 3rd week continued with two games in quick succession as Hoang Anh Gia Lai played against Alphense Boys and RBC Roosendaal. The first game ended in a 3-2 victory for the Vietnamese while the second game marked the biggest win of the trip for the Vietnamese with a 7-0 win. The Vietnamese had now won all games they played with only two left. The week continued with the boys visiting Dutch professional team NAC Breda as they played against Excelsior and Sparta Rotterdam against RKC Waalwijk after playing a couple rounds of footgolf.

During the training month Feyenoord trainers assessed the players and invited the most talented ones to join the Academy for an opportunity to train with one of the youth teams. In the end the two goalkeepers Tran Trung Kien and Ho Thanh Hoa along with two field players, Hoang Vinh Nguyen and Huu Viet Hoang, received the opportunity to train with Feyenoord’s U17’s squad. The players showed good technical ability and a keen eye for the game.

The final week would have the biggest challenges for the Vietnamese as they got ready to play against Feyenoord U17. The game was live streamed in Vietnam where it was watched by an astonishing 80 thousand viewers. Although Hoàng Anh Gia Lai played a solid match and created plenty of opportunities, they did not manage to win against Feyenoord. The Vietnamese lost 4-0. The highlights of this match can be viewed below.

The last match was against Excelsior Rotterdam’s youth squad. Both teams fought hard for the win but neither managed to outplay their opponent and so the game ended in a 1-1 draw. The Vietnamese closed off the month with 5 wins, 1 loss and 1 draw.

‘This month was a great opportunity for the Vietnamese players to develop themselves as footballers and I was happy to see the effort they made during their stay in the Netherlands as they impressed everyone’, said Gido Vader, Manager of International Relations at Feyenoord. ‘We hope to strengthen our ties with Hoàng Anh Gia Lai and enable the development of Vietnamese football. The contribution that we can make in Vietnam is palpable so we at Feyenoord are looking forward to a long and fruitful collaboration’.


Our players had a great experience training within a world’s leading professional environment with advanced modern training methods. We once again express our deep gratitude to Feyenoord for helping our U18 team to have a great opportunity to train in Europe. Mr. Nguyen Tan Anh, CEO Hoàng Anh Gia Lai